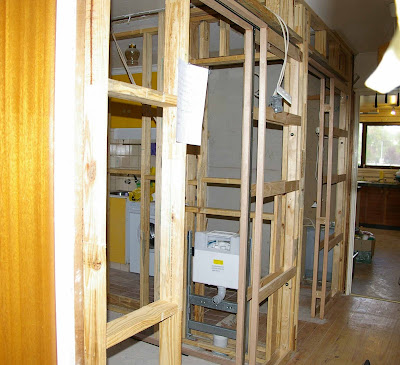 It was a good pantry. With a light in the top, and wide U-shaped shelves so you could still reach things at the back at the top. And now it looks like this. It's at the right, a mere empty frame where the new laundry door will slide in. There is no replacement coming up in the immediate future: I'll be living with shelves in the laundry until we re-do at least some of the kitchen.

It's not so easy to cook with all the ingredients in boxes on the floor. I managed a stirfry on the day the pantry went, and we've been eating the chilli. Tonight I've got ham steaks. I know I've said "never buy ham steaks", but these are different. Free range pork, from the wonderful Eco Meats at Belco Fresh Food market; they are all lean meat. I'm going fruity with them: panfried ham steak with fresh panfried pineapple, plus some "Ham Jam" spicy cherry relish. Add some spuds and a green salad and we're done. I'm actually cooking one steak for the two of us tonight, and a smaller thinner one for 'Ron. I'm going to brush it with Hoi Sin, and pretend it's BBQ pork, and slice it up into a laksa. I usually make laksa with a pre-made paste from the Asian grocer; but maybe one day I'll make a project of it and do my own.

I've also made the bright green pea dip "poicamole" from Clotilde's Chocolate & Zucchini. It's dead easy, and very nice as a dip or a sandwich spread. Note that 300g baby peas only need about 5 minutes to microwave from frozen, if you choose that over the steaming that she recommends.

Today's harvest was 2 figs, the 400g rhubarb, and two medium-small zucchini. It's not much, but at least I'm keeping up with it easily. Today I'm cooking up the rhubarb with four old pink lady apples, to make some breakfast stewed fruit.

I'm microwaving it rather than roasting. I have no tomatoes left over to roast this week, since I used them all in the chilli, and I prefer not to use the oven for a single small dish. It seems like a waste of electricity. The microwave is very energy efficient, and works well on most things that you'd usually steam or boil.

I just chucked the cleaned chopped apple & rhubarb in a glass bowl, with a scant 1/4 cup sugar and a drizzle of Bundaberg ginger beer syrup. Nuke it for 5 minutes, stir, test, keep nuking for 2 minute blocks until it's done. The hardest part was finding the box which had the sugar in it.

This is rather haphazard, and depending on the variety and freshness and fineness of chopping of the apples, you might not get both fruits cooked at once. But it's only for me and I don't care if the rhubarb turns into a sauce. Cooking is much less of a fine art than people often think - perfection is hard, but "reasonably edible" is almost guaranteed with a bit of common sense.