A Couple of Curries 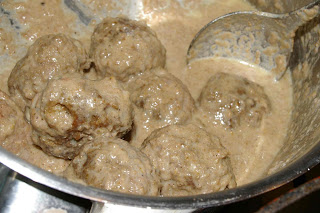 I found a lamb meatball recipe last week, from the "Taste & Create" event, and I also found a recipe for a cashew curry while browsing for non-legume vego dishes. With some lamb mince at the market, courtesy of the saltbush lamb people, and the Bloke's OK to go for meat, this sounded like a good combo. And it is. Not terribly aesthetically appealling, I know. My photos aren't that encouraging.

I kept pretty closely to the recipe for the "Rista" meatballs. I did not have any Kashmiri garam masala, though. I do actually have some "Kashmiri Masala", but it's a paste, not a powder, and has that red colouring you get in tikka. I had a look at it, and decided to just go for regular garam masala, and add a little extra cardamom for the Kashmiri theme. I'm also not convinced that my saffron is any good. But at least my meatballs look much the same as Happy Cook's.

My variant on the Capsicum-Cashew Curry came out a little differently to the original picture. I seem to have much more potato and green and much less cashew. I suspect the author of cheating :) Anyway, it's delicious, a simple dry curry. I varied it in several ways.

First, I did not actually have any black gram dal, nor any asafoetida. Nor did I want to drive off to Belconnen to get them. Remembering that asafoetida is often used instead of garlic, I swapped in a couple of mashed garlic cloves. Also, Pratibha Rao says that usually this dish is made with some other vegetable called "tendle" that I don't know anything about. With her example, I felt free to do some further swapping. I only had one green capsicum on hand, so I added an equivalent bulk of green beans. I also decided to add the capsicum and beans later in the process so they wouldn't overcook.

It's a pleasant dish - gently spiced, warming and filling with the potato. The raw cashews, when soaked and cooked, become soft and a bit bean-like in texture, but they still taste like cashews.

Yum! Always glad to have new veggie recipes to try!

It was really clever of you to go with normal garam masala that the paste and the rista looks delicious.
Thankyou for trying out the recipe.