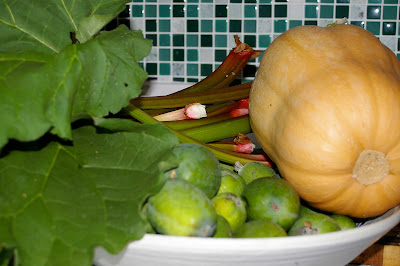 It's almost a month since I last posted. I don't have any major food news, since for a lot of that time I was sick - a nasty cold developed into an even nastier chest infection, for which I've been taking mega-antibiotics and using an inhaler of nasty tasting drugs. Bleah. What can I say? Tinned soups and spaghetti is pretty dull stuff, but at least I did get to eat my stewed quinces and apples - pretty good to perk up a tub of Le Rice. I like the caramel or vanilla flavours, heated up with the stewed fruit.

Meanwhile, the garden has delivered the last of the season's rhubarb, a bucket of feijoas and three mutantly huge butternut pumpkins. Well, stewed or roast rhubarb is lovely, and pumpkins make good mash, baked veg or soup. Or a sweet spicy pie filling, though not everyone agrees... But what is there to do with feijoas?

I've been eating the best of them for my lunchtime fruit, feeling very exotic as I stand in the kitchen at work peeling them and cutting them up onto a plate, along with a sliced persimmon. I prefer to leave them for a couple of days after collection, to soften a little before eating. The inside goes from greeny-white to cream, to pale beige, to deeper beige to brown as it ages. I find the cream stage is best, and I cut off anything past the palest of beige. I'm also not mad on the skins, so I usually peel them. But it is actually edible.

Last year I made a feijoa chutney, which I speculate was invented by someone who was very sick of feijoas. It was more like a Branston pickle, sharp, dark and malty, and I still have masses of it left. This year I decided to try a jam instead. And since feijoa isn't exactly my favourite fruit, I thought of zesting it up with some ginger for interest. This is my first attempt, based loosely on a recipe found on the net somewhere random. If I do this again next year, I'll add even more ginger.

* Chop the ginger finely.
* Wash the lemons, halve and juice one half piece. Save the skin.
* Put the juice of half a lemon in a large bowl, with about 3 cups cold water.
* Peel and chop the feijoas quite small, dropping the pieces into the lemon water as you go.
* Transfer 375ml of the water to a large jam pan.
* Strain the feijoas and add them to the pan.
* Add the chopped ginger, the juice of the 1.5 remaining lemons, and the lemon rinds in large pieces.
* Bring to a simmer and cook for 15-20 minutes.
* Add the sugar and turn up the heat.
* Stir until dissolved, and then boil rapidly until set point is reached (10 minutes).
* Remove the lemon.
* Pour into sterilised jars, and seal.

Notes: To get 1.5kg of feijoas, you will need 2-3 kg of raw fruit, depending how bruised they are. They do say not to use bruised fruit for jam, to which I say - nonsense! Sure, don't use the actual bruised part, but just chop it off and use the good bit. Feijoas fall from the tree when they are ripe enough, and they often have a bruised portion if they land on hard surfaces like a concrete footpath. So here we see the upper one is brown and goopy - into the compost. Lower one, fine. Cut off bruised bit, at left.

Also, jam setting time is a little random. The lemons provide the pectin here, as well as a dash of flavour, but you could use jamsetta instead, and follow the packet directions.

I clean my jars very simply: wash them in the dishwasher and set aside in the cupboard until needed. Then pop them in a sink of very hot water and leave for 10 minutes. Then put them in a warm oven to dry off. Put their lids on when it's still hot.

Jam is really very forgiving; the sugar is a powerful preservative. Scare stories about bottling tend to be about preserving vegetables, with no sugar involved. Chemical sterilisation and very careful attention to detail is much more important there - and one reason among many why I don't actually do that. (Not often having a surplus of veg, and the existence of tins and supermarket freezer sections are other reasons.)