I have a problem with stone fruit 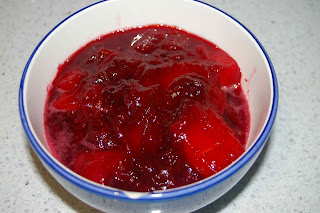 I buy too much of it.

The Bloke doesn't eat any stone fruit, except for dried apricots. And yes, I can easily get through a couple of kilos of cherries in a week all by myself when they're in season. But right now the markets are packed with plums and nectarines and peaches and plumcots and I wander around thinking "I'll just get half a dozen of these" and "ooh, those look nice, how about I just buy four" and somehow I come home with far too much for me to eat in a week. Especially if I've bought huge punnets of blackberries, strawberries and blueberries as well.

And I have another problem with stone fruit. These days most of them are sold rock hard. Even the peaches from the growers market are too firm to be edible immediately. Stone fruit don't really ripen off the tree, no extra sweetness develops, but they will soften. Pop them in the fruit bowl for two or three days, watch like a hawk, and eat them when they are just softened enough. But if you leave them for even 12 hours longer, they start getting a bit wrinkly and too soft to be nice. And if you then put them in the fridge and leave them for a few more days, some will go off entirely, and some will get a bit squishy in spots.

Here's what I did to salvage the old fruit when I got back from Goulburn.

Wash the fruit well.
Chop the plums small, removing stones and any nasty dead bits.
Chuck them in a saucepan with the sugar, rosewater and the water.
Bring to a simmer.
Cut the peaches in large pieces - halves, or quarters.
Add them to the plums, and let simmer for another 10-15 minutes.
Allow to cool slightly, then remove peach pieces.
Slip off the peach skins.
Mash the plum sauce, or if you feel energetic, sieve or puree it.
Return the peach pieces, mix well, and chill.


Notes: This was a really great outcome - the rose with the blood plum and hint of vanilla is a very good combination. It's obviously adaptable to other fruits; this is just what was in the fridge, but I think I lucked out here. The aromatic white peach holds up well against the sauce, and matches with the rose.

Peach skins are easy to slip off when the fruit is cooked. If you prefer, you can skin them like tomatoes, by standing then in a bowl of boiling water for a minute or two.

Eat these for breakfast - cold with Greek yoghurt and granola, or warm on porridge, depending on what the weather is doing.
Posted by Cath at 20:41 3 comments:

Eating around the web

I'm very erratic with food reading on the web. There's a few blogs that I check regularly, but otherwise things just seem to turn up. From links friends post on facebook or message boards, mostly. Or sometimes I google an ingredient, and find something on some totally random site. I've had the chance to try quite a few things recently; with this crazy weather anything from salad to porridge is an option.

I googled quinoa a while ago and found a nice quinoa porridge. At the same site, a recipe for quinoa pilaf took my fancy. Now, as the bloke hates corn and walnuts, I had to make a variant. But the general idea is very adaptable. Quinoa cooked in stock, then fried up with onion, spices, and vegetables. It's good with that dark Tuscan kale, but you could try spinach or silverbeet. I served it as an accompaniment to some quick grilled lamb chops from that new Dickson butcher.

And 35C one day, 15C the next, it's still possible to have porridge. I was quite intrigued by this idea, cooking brown rice in a crockpot. I almost followed the recipe, except that I used low fat milk instead of full-fat, and coconut milk and a 1/4 cup of sugar instead of the sweetened condensed milk. And raspberries on top instead of cranberries or raisins cooked in. So, yeah, almost the same. The result is, well, OK. The bran separates off, while the inner rice goes squishy, which gives it more of a porridge texture than a rice pudding texture. Also I think it needed less sugar. I couldn't put maple syrup on top since it was already quite sweet enough for me.

Serious Eats crops up quite a lot, since I'm a facebook fan. This American site has some wonderful discussions. Check out this hilarious recipe for boiled water, and don't miss the reader comments. These chocolate chip cookies are from Serious Eats. I made them before Xmas, and have two sausages of dough still in the freezer waiting for the next cookie occasion.

And then there's this chocolate cake. I simply could not resist making this, as it is just so very weird. It's gluten-free - it uses not chickpea flour but actual chickpeas. I liked the flavour in the end. The chickpeas add some flavour, but it's quite neutral tending to nutty - a reasonable match to chocolate. The texture was less of a hit. It came out quite dry. I found that it was OK when tempered with a dollop of icecream, and B2 liked it, but B1 did not. So, variable.

I did edit the recipe slightly for Australian measures, so here you go.


Note: I used the extra chickpeas in a mixed veggie curry. You could also add them to a soup or a salad, or mash them up with garlic, lemon and tahini to make hommous.

I like to melt chocolate in the microwave - break it up into a glass bowl, zap it for 20 sec, stir well, and repeat until all is melted. Much easier than a double boiler, or the old bowl over boiling water technique.
Posted by Cath at 13:29 1 comment:

We've just got back from Goulburn, where we saw some amazing acts at the annual Australian Blues Festival. Pugsley Buzzard is a fabulous pianist, with a voice of gravel. Sorta kinda like a cross between Louis Armstrong, Tom Waits, Fats Waller and Nick Cave; always worth seeing. And we saw the Lemon Squeezing Daddies with new front woman, Perle Noire, who looks and sounds like she's out of Chicago but is actually a Londoner. In the one paid show we went to, Doc Neeson (of the Angels) walked on stage looking oddly like Matt Preston, and delivered a solid blues-rock set, with guitarist Mal Eastwick. New finds from this time are the young Shaun Kirk, from Melbourne and Luna, who it turns out are from Canberra, even though I haven't seen them around here yet.

In food news, we ate at the Tatts one night, which is pretty standard pub grub. They do a decent burger and a cook your own steak; the scotch fillet I had was great, very tender. The salad bar was decent, with good fresh greens but I'd steer clear of the curry coleslaw if I were you. The other night we ate at the Goulburn Workers Club, which is pretty standard club grub. A decent salt and pepper squid, a slightly odd caesar salad with whole lettuce leaves and no egg, and a big slice of garlic bread instead of croutons. Also no anchovies, but I don't even expect anchovies in a Caesar these days.

Cafe Book is our first choice option for breakfast, with a fairly standard bacon and egg breakfast. The menu is nothing remarkable, but the food is all fresh and hot and well cooked. You get service with a smile, and a huge wall of second hand books for sale. And enormous smoothies. The bakery up the road near the Big Merino is not bad, either, and do a nice sourdough and a good cornbread. In both cases, it helps to order the coffee extra strong. What is it with country towns and weak coffee?


Meanwhile, back in Canberra, the Handmade Upmarket is back next weekend. This thing just keeps growing and growing. It's a market for regional craftspeople, and the goods for sale include a decent selection of food, as well as all the jewelery, clothes, bags and so on. It outgrew the Albert Hall, then the Yarralumla Woolshed and the Kamberra Wine centre, and have now moved to the National Convention Centre. Saturday 19th February, from 11am. They're also running a shop, on the Boulevard near the former Electric Shadows, but the range there is naturally much smaller. As well as the crafty stuff, they stock some good chockies from Lindsay & Edmunds and the Curious Chocolatier.

By the way, pARTy cakes will be there, and donating 25% of their profits to ovarian cancer research. So get in there and eat cake. I've bought cupcakes from them before; they are very good.
Posted by Cath at 19:03 3 comments:

The non-Dickson developments are that I've given the blog a super-quick facelift with a standard blogger template. And I've taken up twittering. You can follow me at @CathCanCook if you feel so inclined. I'm not tweeting a lot, since my phone doesn't currently support it, but definitely more than I'm blogging at the moment!

Here's the few new points of note around Dickson.

An Asian supermarket, Asian Quay, has opened on Challis St, where MalAdjusted used to be. If you're worried by this news, do not fear! Mal's lovely bicycle shop has just moved around the corner. It's now in the square behind Zeffirellis. You'll also find a new cafe/bar here, by the name of Dzire, where the much lamented TurkOz used to be. I haven't tried this one out yet, but I will try to get there soon. They have a website at http://www.dzire.com.au but it's just a stub at the moment.

Asian Quay is a bit different from the other Asian grocers around the area. They seem to stock a lot more vegetarian ingredients than most - veggie versions of instant noodles, oyster sauce, and fake meats from TVP to soy "duck necks". There's also a wider range of sweets, especially icecreams and other frozen desserts. But the veggie section is very minimal; Saigon is still far and away the best for fruit and veg.

Finally, there is a new butcher, imaginatively titled "The Butcher Shop". It's near Woolworths, in the square in the corner. From Woollies, go past the chemist and jeweler, and look to the right, across from the Shiny Things Shop. (Not its real name.) They're in the new tradition of butchers, with house-made sausages and ready made kebabs and marinated ready-to-go roasts. They stock King Island beef. I haven't checked all the details about what's local and what's free range yet, but I can say that the sausages, silverside and lamb chops that I've had so far have all been top quality.
Posted by Cath at 11:21 6 comments: