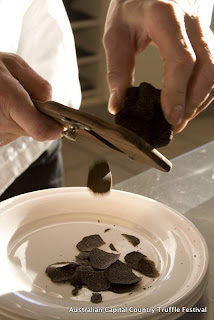 Saturday lunch was in Bungendore, at Le Tres Bon. We had a hands-on demonstration of truffle preparation, and put together a lunch of truffled chicken with Périgueux sauce and mash, followed by a truffled crème brûlée. It was a sweet deal - $100 for a two hour demonstration and talk, the amazing meal and a couple of glasses of rather good wine.

Mostly chef Christophe did the cooking while we watched, but we did get to bone the chicken and help with peeling potatoes and separating eggs and such. And he shared his crème brûlée recipe with us. I asked permission to pass it on here, and Josephine said yes as long as I gave him full credit. It's not his bitter almond one, though. You will have to go there to eat that. And I'd encourage you to do that, the food is great and they are lovely people.

The truffle came from Braidwood. Yes - this is true local food! In case you missed seeing all the ads recently, the Truffle Festival is on. The local climate is perfect for truffles, and there are now around 30 growers in the region. Aussie farmers are using dogs to scent out the truffles, rather than the traditional French pigs.

We actually started with the brulee, since it needed to bake and cool. A few of us separated eggs, and then Christophe whisked the yolks up with cream, vanilla and sugar. He put a couple of julienne slices of shaved truffle in each ramekin before pouring on the custard mix. And then it was off to oven in the bain-marie.

The main was chicken and the lightest, fluffiest mash I can ever recall. There's no formal recipe for the mash. Basically all you do is boil the potatoes, then pass it through a veggie mouli - this lightens it a lot, compared with the old potato masher. Then beat in some milk, melted butter and a smidge of nutmeg and salt. And pipe it out onto the plate with a cunning swirly action.

The chickens were local free range organic birds. We split them into four quarters, saving the frames for stock, and boned the thighs. Each quarter was folded around a truffle shaving, sprinkled with salt and white pepper, then tied up with string into a neat bundle. They were pan-fried in a mix of olive oil and butter until pale golden, and then Christophe dredged a little flour over them before adding chicken stock, white wine, chopped onion and carrot, a bay leaf, rosemary sprig and parsley stalks. And so they were left to simmer gently for an hour. Check occasionally to see if the stock needs topping up.

The sauce - well, it was amazing. I've seen Iron Chef French Hiroyuki Sakai, the Delacroix of French Cuisine, do the "perry-goo" on telly, but I've never had it in real life. To make this, we used the pan juices from the chicken. These were brilliant to start with, and when strained into a pot and enriched with cream and duck foie gras and butter and a goodly amount of truffle - well, it's heaven. Time didn't actually permit a proper reduction, so Christophe showed us his sneaky trick of thickening it up with - bog standard cornflour and water! So in theory his sauce should be even better, but that is very hard to imagine. 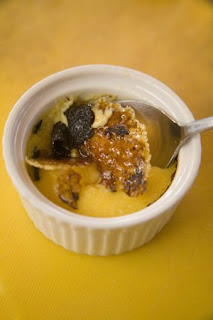 Whisk up the eggs yolks with the sugar, then whisk in the cream and vanilla.
Make sure you have a slice of truffle per serve set aside. Julienne the rest of the shavings and add a couple to each of 12 small ramekins.
Line a deep baking tray with paper, then add the ramekins, then pour water around them.
Bake at 130C for 30 minutes, until just set.
When cool to room temperature, sprinkle each with sugar (a scant teaspoon per serve).
Caramelise it with a kitchen blowtorch and while the sugar is still bubbling, add on the reserved truffle shaving.
Serve immediately.

Notes: Christophe actually made twice this quantity. He notes that if you are not using truffle, then brown sugar is better for the caramelising. The paper in the baking is to stop the water bubbling if it boils - splashes of water could spoil the smoothness.

This sounds a bit gimmicky, and reminiscent again of Iron Chef - an eggplant dessert! A fish icecream! But really, the truffle works surprisingly well in this. There is a mushroomy flavour, but it does not clash. It's a complex flavour, highly aromatic, and plays well with the egg and caramel.

I'm quite tempted to go look for a truffle now. They can be bought at EPIC markets if you get in early enough, and while it may be around $3 per gram, you don't actually need a lot. You can perfume rice or eggs with it, just by leaving the truffle with them in a sealed container for three or four days. Don't try making truffle oil, though - one thing we learned is that the Perigord style black truffles will not flavour oil in any lasting manner. Truffle oil as sold in gourmet shops is either artificially flavoured, or made with Italian white truffle.

A truffle should be kept wrapped in a damp cloth in a sealed jar. It will last up to two weeks, but remember that it is a fresh product. You should have enough time to scent your eggs, rice or cheese, but basically it's just a mushroom, with high water content. It will go off if left too long.

The Credits
Recipe: Christophe Gregoire
Photos: Fred Harden from the Australian Capital Country Truffle Festival. The first one depicts a truffle being shaved, but it's not Christophe. It's Jan Gundlach from SENSO, aka Flavours in Fyshwick. The second is an actual dessert from this demonstration: Fred was there with camera.

Foie gras AND truffle in a French-style sauce. I can die happy now. That sauce was just ... wow.