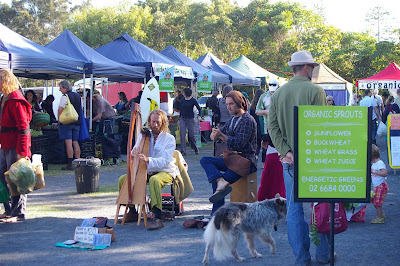 In case you were wondering, I've been in Byron Bay. And of course I went to the Farmers' Market, which is on Thursday mornings from 8am-11am. Since we flew out on Thursday night, I couldn't buy very much there, but I did have a lovely time wandering around and chatting to the stall holders. (More photos below the fold.)

I made up for it this morning with this glamorous array of winter produce, as depicted against the new tiles and benchtop. OK, OK, so it would have been a lot more glamorous if I'd taken them out of the plastic bags. We have beetroot, silverbeet, pumpkin, cauli, carrots, apples, and a few hothouse tomatoes and salad mix. And also a leg of hoggett, which is something I haven't seen in decades. A slow roast on Monday seems just the ticket to farewell our guests who arrive this arvo.

I was tempted by some Robyn Rowe chocolates, but it was one of those post-indulgence days when vegetables seem more interesting than choccie. Robyn is from Murrumbatemam, which brings our local chocolatier count back up to four. Her chocs are all mixed boxed sets, in varying sizes, but you can pre-order specific ones if you like. Her dark is a 52% cocoa, not too sweet. I rather fancy the Clonakilla muscat and the cherry port - next time, perhaps. No website, but she does take telephone orders (62275064). 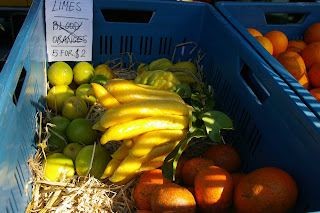 Byron was quite the contrast, though of course it's winter there too so there are some commonalities. There were masses of citrus fruits - limes and lemons and oranges of many varieties, including this Buddha's Hand citron. There were tropical flowers, avocados, custard apples and pawpaws, and fresh ginger, galangal and turmeric. There was a man pressing fresh sugar cane juice, and several stalls with locally grown coffee. There was even locally grown rice - brown, of course, a dry highland variety that doesn't need paddies. And it's not all for vegetarians: there's several local meat growers with organic and free range pork and lamb. 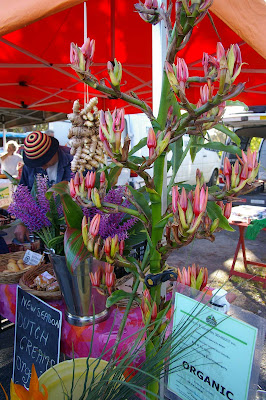 They also had a few bakeries, including some with sprouted seed breads and spelt breads. The woodfired Heart Breads chocolate brioche was very delicious, as was the apple. There was quite a lot more of the "biodynamic" stuff than we have in Canberra. And there was wheatgrass and energetic sprouts, and a weird raw foods place, and guitar playing aged hippie buskers singing about peace and rainbows with dolphin stickers. The pixie moondust does come on a bit strong at times, as in the rest of the town, but mostly it's your regular organic and local produce market.

I bought just a few items to take home. Some of the rice, and some coffee, and also some honey roast macadamias and a jar of Davidson plum jam from the native produce specialists. Their wild lime marmalade and lillipilli jam were also fabulous. Rainforest Foods is their name and they do mail-order. I kept purchases to a minimum since it had to go in the suitcase. And much as I might like a dragonfruit tree, I'm sure it would not have liked this morning's frost! 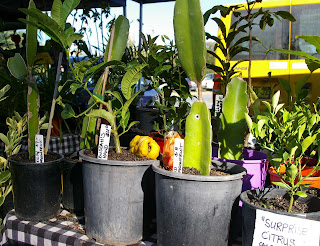 I love Davidson Plum anything! (Mungalli Creek make a yummy yoghurt).I'll have to check out the rainforest dudes.

We do chocolate well in Canberra? Oh and the coffee. In mufact I think Canberra may be one of Australia's best kept secrets!