The last of Easter 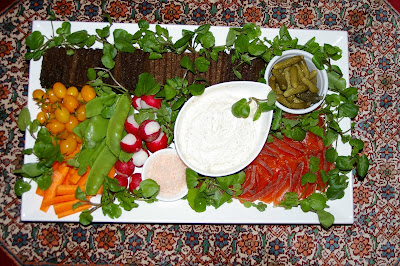 Isn't this pretty? That was my entree plate for our annual Easter dinner - cured salmon, pumpernickel, herbed cream cheese, cornichons and assorted crudites. With pink salt for dipping the radishes.

I was going to post a hot cross bun picture, but I only took one and it was crap. Sorry about that, but here's the recipe anyway. I modified it from a very good book: Baker, by Dean Brettschneider and Lauraine Jacobs. It's a collection of recipes from famous bakeries all over Australia and New Zealand - though there are none from Canberra. They missed Silo and Cornucopia, and Knead and Flute didn't exist when the book was published.

There's a long essay chapter on the principles of baking, which is really helpful for general background knowledge and troubleshooting. It covers pastry and cakes as well as bread baking and other yeast doughs. Though I own neither a dough thermometer nor a means of keeping dough at a very specific temperature. Never mind, yeast is quite tolerant: just watch for the size and texture rather than the time, and use the indent test for the final proofing.


* Soak the raisins and currants in warm water for 15 minutes. Drain and add mixed peel, and leave to absorb remaining moisture for an hour in a bowl, or overnight in a sieve.

* Make up the bread mix with quantities of yeast, salt and sugar as on your packet directions.

* Mix the milk, butter and egg well, and check the liquid measurement with your bread mix. Add more milk to top up to the required level if necessary. Make sure it is lukewarm, not hot. About 30C.

* Mix milk into flour, and start kneading. Work the dough for about 8 minutes, until moderately elastic. Rest for 10 minutes.

* Add the spices, and knead the dough for another 7 minutes until fully developed - dough is silky, elastic, and stretches smoothly.

* Knead through the fruit gently until well mixed.

* Turn dough into an oiled bowl, cover with cling wrap with plenty of overhang - not tucked around the dough ball but going up the inside of the bowl.

* Leave in a warm spot for one hour, or until doubled in bulk.

* Punch down dough, turn out onto a lightly floured board, and split into twelve parts. Round each one into a ball by cupping it in your hand and rolling a bit. Put balls of dough onto a lined baking tray in a 3x4 array.

* Cover in clingfilm and leave to rise again for 45min, or until doubled again. An indentation with your finger will spring back slowly but not quite completely when this is ready. (If quickly, it's not done yet; if not at all, it's overproofed.)

* Add flour and water paste crosses: 1 cup flour, mixed with water to paste, piped out from a cut corner on a sandwich bag. (Or don't bother with this and just do fruit buns, since Easter is well over now.)

* Bake buns at 200C for 15-20 minutes, until golden brown, turning tray about halfway though for evenness.

Notes: This recipe comes from the New Norcia bakery. The original has a sticky lemon glaze, which I don't bother with. It also has sultanas instead of raisins, coriander rather than cardamom, and all white flour. The flour change was a random factor based on what was actually in the pantry, but I like it so I will keep it. I bought the bread mix on special, it's got some citric acid and salt in it already. If I don't have a bread mix on hand next time, I'll use a half and half mix of wholemeal and white flour. I also fancy soaking the fruit in tea or brandy rather than plain water, and swapping some chopped dried apricot for some of the raisins.

If you do not have a packet of bread mix, then use:
500g strong flour
2 tablespoons raw sugar
2 level teaspoons salt
1/2 teaspoon citric acid ("bread improver")
1 tablespoon dried yeast

That is indeed a pretty plate of food, I must make that salamon

PZ's fault? I thought B2 and I did some good work in the trenches, pushing you into ladling out the dollars. Tempt tempt, we said. What a great price for the size of it, we said. Why, I even bought two vases just to get you in the mood!

Which I left behind, not without some trepidation, because one person who visits the house fairly regularly is a dropsy.

I is baaaack, loaded with that gorgeous sourdough you mentioned. Nom Nom Nom I go...