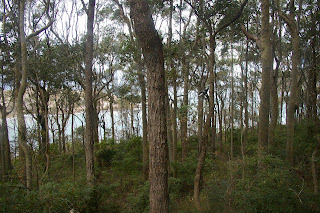 Last weekend, and some days surrounding it, I went to the coast with B1 & B2. We had a great chillout time - while we had planned to do some walks, it rained a bit too much so we spent most of the time indoors, reading and cooking. This is no hardship when the view from the couch looks like this picture.

We did do some shopping - food in Bateman's Bay, hippie clothes and pottery in Mogo - and we went to The River Moruya to celebrate B2's birthday in style. And we had a sandwich lunch in Mogo at Suzanne's bakery - they were out of the fabulous sourdough for retail, but not for the cafe, so we got to eat some anyway. Ha! 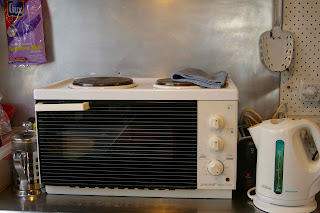 The cooking was an adventure. The stove looks like this: note the kettle on side giving scale. The oven is large enough for 2 small muffin trays or one cake, there are two hotplates on top, but you can't use them at the same time. There is also a microwave and an electric frying pan.

We did pretty well with it. We made hotcakes and risotto in the frying pan, and stuffed capsicums, roast cauliflower, and two lots of cake in the oven. The hotplate on top I used only twice. Once, to heat up some pumpkin soup, and the second time, for a cake topping. Dinner on day one was mugs of pumpkin & chestnut soup from my freezer, augmented with leftover pumpkin from the Easter pie-baking. A good post-driving snack dinner, with added cheese, biscuits, cured salmon remnants, avocado, olives and fruit. All of our recipe cooking came from the latest Donna Hay magazine (Autumn 2009). B1 had brought it along with an eye to the bundt cake feature, and as we browsed it, more and more good ideas came to mind.

The hotcakes, as pictured on the magazine cover, were fabulous, and quite simple. I'm not sure why I don't regularly make these. It does require planned shopping, I suppose, though fresh ricotta and buttermilk are the only ingredients I don't keep in stock all the time. We used fresh blueberries, but of course frozen would do. I'll pop in the recipe at the end of this post.

The Donna Hay web people have posted the recipe to the Cinnamon-sugar Maple Bundt Cakes, so you can go look at it there. They are worth trying: thick textured, moist and fruity, with a fun cinnamon-sugar coating like a doughnut. They are also quite easy to make, though grating the apples is a bit of a pain. And they keep well. 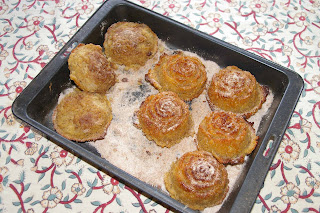 These were less successful than the hotcakes, probably for a number of reasons. Not being in possession of any mini-bundt tins, I used B1's pair of rose-shaped mini cake silicon forms. These ended up being a bit overfull of the mix, and the cooking time was way wrong. The first batch out of the oven were underdone on the bottom and stuck to the pans - despite being apparently done by skewer test. The second batch I left a lot longer, and they came out fine. It could well be the oven: perhaps two batches prevents the heat circulating properly. Or the heat is too easily let out.

The other bundt cake that B1 made was a fig and date one. This worked better - the single tin may have helped. I made the toffee coating for it, and I think there was too much. If you have bought this mag and want to make this cake, try using half the amount of toffee. It's amazing when first made - shades of sticky date pudding, with crisp toffee like a brulee coating. The toffee topping softens after a day, though, as you'd expect. It's still good, just not so much of a showpiece.

And just so you don't think we ate nothing but sweets, we also made the roast cauliflower and almond risotto from that issue. This is actually misnamed: it's a simple risotto flavoured with fresh sage. The cauliflower served alongside. The risotto is just butter, onion, sage, rice, sherry, veggie stock and parmesan. Then you add a side of the cauli, and some slivers of washed rind cheese - Taleggio if you can get it. The result is totally wonderful, and I want to do it again. With one caveat: use good stock. The standard Campbells brand veggie stock is a bit salty and rather unsubtle. I'd prefer a good chicken stock, and maybe some white wine.

Notes: You'll need a slightly lower heat than with regular pancakes as these are thick, and the middle needs to cook before the outsides burn. Serve with maple syrup. Or lemon and sugar. Or maple butter if you can be bothered making it. We couldn't.


Recipe 2: Roast Cauliflower with Sage & Almonds
500g cauliflower florets
2 tablespoons olive oil
salt and pepper to taste
1/2 bunch sage
1/4 cup chopped almonds
Preheat oven to 220C.
Toss the cauliflower into a baking tray with the salt, pepper and oil.
Roast for 15 minutes.
Strip whole leaves off the sage, discarding stalks, and chop the almonds.
Add to the pan and roast a further 5-10 minutes until cauliflower is golden and sage is crisp.


Notes: Serve this as a veggie side to anything you like, but it's especially good with a cheesy sage risotto! But Donna, darls, what on earth do you mean by "a bunch" of sage? Who knows? In general supermarket sales, sage seems to come in smaller packs than parsley or coriander, so maybe it's about 1/4 cup of leaves, loose-packed? Whatever.

Good weekend by the sound of it.

I shall try this out with the cauliflower in the crisper, sounds great

No photo of the fig cake? Did it not come out?

Good excuse to make another one!