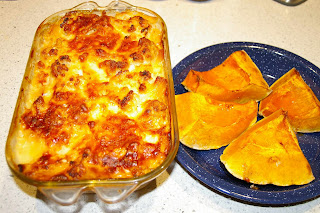 This is what we had for dinner yesterday. As I was making it, I remembered that a white sauce or bechamel is sometimes seen as a bit tricky and off-putting, yet there I was doing it entirely by eye. And it worked just fine. Which means not that I am a super-genius chef, but really that it's not all that hard.

Cauliflower cheese is one of those old stock favourites, simple old-fashioned comfort food. So is macaroni cheese. My Mum used to make cauli cheese when I was a kid, and she'd usually serve it with some bacon or fried mushrooms on the side. Combining the cauliflower with macaroni is my idea, though. Sometimes I use a light white sauce for it, much the same as the light parsley sauce that goes with corned beef.

Boil the macaroni until barely al dente.
Split the cauliflower into florets, and steam or microwave until barely done.
Combine the two in a deep casserole dish.
Make a cheese sauce, and pour it into the dish.
Stir to make sure everything is well coated with the sauce.
Sprinkle grated cheese over the top.
Bake at 140C for 1 & 3/4 hours.


Notes: I've often baked it shorter and hotter, but this slower cooking works better. The sauce can split (separate) at the hotter temp. This was also perfect timing to put it in oven, go to dance class, and then come home ready for a hot dinner. I popped in some large chunks of pumpkin, and when I got home all I had to do was microwave some frozen peas. And there's plenty left over for another dinner and a lunch or two.


Not Recipe: Cheese Sauce
OK, if you want to see a proper bechamel, you can find it on the web, or in most basic cookbooks. Your classic cheese sauce is just a bechamel with grated cheese mixed in. You do this mixing off the heat, after the sauce has thickened. Stir well to melt the cheese into the sauce, add a smidge of nutmeg, and you're done. Here's a Delia Smith version.

The good thing about doing it properly is the flavouring of the milk with the onion and parsley. Stodgy old British plain cookery tends to skip this nicety. The bottom line basic is the plain white sauce - here's a site with measurements. What I did this time was much closer to the stodgy Brit version than the French, though I did add some extra flavour.

I whacked a large spoonful of margarine in the saucepan. I was all out of butter, so I had to use the Bloke's anti-cholesterol marg that he keeps for his toast. Which, judging by the sputtering, contains quite a bit of water. Melt it, then stir in about twice the volume of plain flour. Stir over the heat until well mixed. Pour in about 600ml cold milk all at once. Stir very well - in fact, use a heat-resistant whisk. Keep stirring until it thickens. If it's still lumpy, whisk it some more, but it's best to get the lumps out before it gets hot enough to thicken. Add two tablespoons of sherry and half a teaspoon of mustard and stir well.

If it's too thick add a little more milk. If it's not thick enough, a teaspoon or two of cornflour dissolved in a little water will fix it up. A thin pouring custard is about the idea, not one of those premium heavy ones.

Remove from heat and add plenty of grated cheese - I used 50g of parmesan, 50g of sharp cheddar, and about 75g of "pizza cheese". Stir well until cheese is melted and mixed in well. Taste, and add a pinch of salt if you like. I usually add a little nutmeg, but I forgot this time.

This is good for using up loose ends of cheese. Remnants of ricotta or cream cheese can go in as well as the hard cheeses.

Hello - just had to say thanks for the tip about the lower temperature. Now my cauliflower cheese can be a thing of beauty, instead of a thing of slight wateriness.