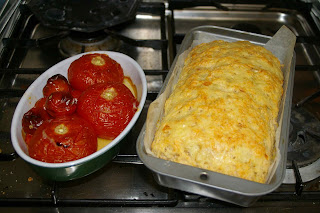 I've been slowly cleaning out the fridge and discovering things that need using up. Some very nice young carrots from the EPIC market had gone all limp and floppy. I also had some baby leeks and spring onions (the kind with the bulb) that were looking the worse for wear. And a couple of old tomatoes and half a punnet of large cherry tomatoes. These are easy things to deal with.

If you're a regular reader, you know that I roast tomatoes all the time. Cherry tomatoes work too. Since I'm basically reducing them to sauce, it doesn't matter that they take less time than the larger ones. Into the slow oven for an hour or so to caramelise a bit, peel when cool, and squish into a container for later use in a pasta or pizza sauce. 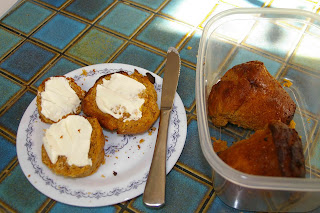 Floppy carrots will come good with iced water. You peel them and cut off the tops, and stick them in a container of cold water. Then it's into the fridge for an hour, or up to several days, even. They came so good that I ate several of them raw as a nice crunchy side to my sandwich lunch the other day. But I also saw a carrot muffin recipe in one of those cheapie supermarket food magazines and I felt inspired. I didn't have quite the required set of ingredients, so I improvised a bit. See below for the recipe.

As for the onions, well, as long as they're not too slimy you can just keep stripping off outer layers until you get to a nice core. I did this and chopped the resulting onion and leek mix fine. I fried them gently in a little mixed olive & canola oil until soft and a bit browned. Then I mixed them in to a beer bread mix, along with a teaspoon of caraway seeds and half a cup of coarsely grated strong cheddar. The beer was Cascade this time. We'll have it for dinner tonight, with some of that Carolina pork from the freezer, and a coleslaw.

I confess that I had to throw out some green beans and plums. They were definitely off. And some bread went moldy. In this weather, it really helps to keep it in the fridge. Mea culpa.

Notes: Makes 6 large or 12 small.
Tip: honey is easier to measure if you microwave it for 20 seconds to runny. Using an oiled spoon helps, too.

These muffins came out surprisingly well. At first I thought I'd totally screwed up by burning them, and I'm still dubious about whether my oven is behaving itself on the non-fan setting. (Fan setting is still broken.) I made 6 large ones, baked them for 25 minutes before testing, and by then they were all a bit burned on the bottom and a couple a tad burned on top. (Oven is hotter at front than back.)

But it wasn't too bad - cut off the bottom and trim any burned bits, and they are good to go. They're even nicely moist; perhaps that's the yoghurt. They are good with cream cheese - it's almost like having carrot cake for breakfast.

Oh, and here's a bonus. My lunch, a tuna pasta salad. Using up the last of several salad veggies - and now I must go to the shop to restock. 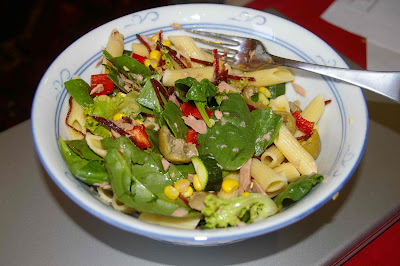