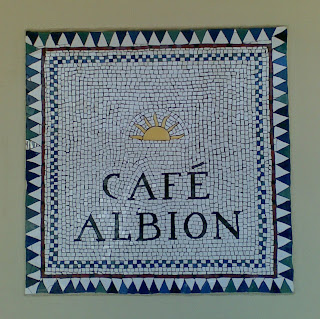 I spent that recent hot weekend down the coast, with my mates B1 and B2, and it was just lovely. First stop was Braidwood, for lunch at Cafe Albion. This has changed hands in the last year, and the new management has extended into the former antique shop next door. It's in a simple and clean country style - a slow combustion fire, wooden furniture, open to the air in the heat.

The menu has been fluffed up a bit, but it's still a cafe. Coffee and cake, sandwiches, light meals. I'm impressed - the coffee ($2.80) was good; my salad was pretty good; B2's tomato bruschetta ($9) was tasty with a noticably good olive oil. I had a smoked trout salad with mixed leaves and kipfler potatoes, beetroot and asparagus - the veggies were warm, the horseradish dressing was mild but good. The menu concentrates on local produce, with a few exceptions like Fremantle sardines. They have a license now, and the wine list is also mostly local. Lots of their cakes are gluten-free, too. Nice place - I recommend it without hesitation.

After lunch we grabbed some sourdough from the Braidwood bakery, and headed on down the mountain. B1 has a coast house at Guerilla Bay, not a fancy one but a pair of little shacks set in among the trees. The shade and the sea breeze keeps it pleasantly cool - even when in town it was sweltering up round the 40 degree mark. We swam, we ate random snacky meals of fancy cheese and fruit from the fridge, we threw fruit and bread scraps at the foraging possums, we lazed around and read books, we shopped at Mogo.

Mogo has quite a few places to shop, but mostly we went to the Trading Post and Suzanne's. The Trading Post is clothes, jewelry and knickknacks all in the general hippy eastern vein. I bought a couple of cheesecloth shirts and two rayon ones, and some shell earrings. And in a surge of fellow-feeling, the three of us now have matching beach cover-up shirts. It's like a club. I feel so teenaged!

We ate lunch at Suzanne's, which is now known in the local pamphlet guides as the "Blue Fox Cafe". This will not help you if you're looking for it: the only external sign says "Suzanne's". The cafe is on the left side of the entry, the bakery and organic grocer on the right. The bakery is deservedly well known: Suzanne bakes the most amazing sourdough breads. B2 and I shared a loaf of fruitbread to take home. It's $10.50, which sounds a lot, but it is a large heavy loaf. It's jam packed full of figs and dates and apricots, and baked with a layer of nuts on the base, and amazingly good.

I had sampled the 10-grain sourdough with my lunch on our Mogo shopping day. The Blue Fox does a simple menu of cakes, sandwiches ($8-14) and salad bowls ($12-18). They are very good. The salad bowl is the larger meal: it's accompanied by two slices of toasted 10-grain sourdough, as well as some home made potato salad. I had a tuna one, with a balsamic dressing, and some olives and semi-dried tomatoes. Very delicious - a good simple lunch. The coffee is organic and free trade, and not too bad. My macchiato was a little too bitter for perfection, but with plenty of flavour.

Our final meal was at the Star Deli in Bateman's Bay. This is a very reliable standard large cafe-restaurant, which is also open longer hours than most. It's light and airy, and looks out over the river. They do fish & chips, pizza, sandwiches and regular meals; they have a kids menu, and a standard type wine and beer list. The toilets are updstairs, I'm not sure if there's any disabled access.

This was our last meal before coming home, a very late lunch after clean-up. We had a mixed seafood platter to start, and two different veggie pizzas between the three of us. The platter was very good: 3 large oysters, quite a few large cold prawns, some dips, fetta and olives. The pizzas were pretty good, too - though the chef there has a big thing for roasted garlic. Quite a few huge whole cloves of it on both pizzas, not just a thin smear in the sauce. I thought it was a bit much, and only ate about half of mine. They were easy to pick off, being so large.

I'm jealous - we made a point of seeking out the bakery during January but I guess bakers have to have holidays too. I'd be happy to pay that for a good loaf, but to pay it for a terrible, unfinishable one hurts.