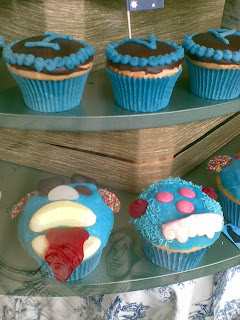 Every February, the Australian Blues Music Festival is held in Goulburn. The Bloke and I have been going for several years now, first staying in a caravan park on the edge of town, and more recently at a motel in the centre of town. There are dozens of musical acts, from all over Australia, and they perform in the various clubs and pubs around town. There's workshops and jam sessions, and a market day in Belmore Park, and a shop window decorating competition. Most places do some sort of blue theme - this bakery's blue cup cake faces cracked me up.

The festival has downsized somewhat in the last couple of years. There used to be a big tent out the back of the Tattersalls hotel, but that stopped with a change of management. But it's still a terrific festival - and it really is an Australian Blues festival. All Australian acts, and all bluesy. No international acts, no pop, no hiphop - unlike some others I could name...

So what do you eat? Goulburn itself isn't exactly a foodie destination. The surrounding countryside is our own local region and has much good stuff, but wanting to get to various acts leaves you with very little time for lunch and dinner breaks. You're not about to drive off to a Lake George winery for lunch. The Saturday market tends to just knickknacks, jewelry and clothes, with no food. Sometimes a local vegetable and honey seller is there, and a Rotary Club does a sausage sizzle. But still, there's some quite decent stuff around.

We had dinner on Friday night at the Suwannee (how I love ya, how I love ya), Thai restaurant. It's pretty good food, and has quick service: we were in and out in under an hour. The chicken satay sticks were nicely moist with a good peanut sauce; the massaman beef curry was a bit too sweet for me, and the potato and sweet potato had been microwaved separately rather than cooked in it. But the beef chunks were large and tender and well-flavoured. The "hot" chilli basil stirfry prawns were probably frozen rather than fresh, but good nevertheless. They came with plenty of crisp veggies in the stirfry, though only a mild chilli.

I had breakfast on both Saturday and Sunday mornings at Cafe Book. This is new - last year there was some other cafe there, with dreadful slow service and very ordinary food. Cafe Book is a huge improvement: it's light and bright, with country style pale lime-wash painted tables down the centre. Dark wood and banquette tables line one wall, and bookshelves line the other. The books are second hand, for sale, and organised eclectically by author. There's no genre separation: China Mieville, Herman Melville, Val McDermid and Henry Miller all jostle in the Ms.

The menu is quite simple - variations on bacon and eggs and toast for breakfast; sandwiches, burgers, quiche, roast meat rolls and sausage in a bun for lunch. The coffee ($3.20) is not bad, as long as you remember that you're in a country town and ask for double shots. My bacon and eggs ($9.90) was served piping hot, with a baby spinach garnish, and the white toast served on the side so it doesn't get soggy. The eggs are free range, the bacon is short rindless rashers. On Sunday I had raisin toast and fruit salad, which was similarly sound without being flashy. Thick slices of toast, nice and hot, with butter. The fruit was varied and fresh - the apple was just starting to brown a little; they should learn the lemon juice trick. Good honest grub, friendly and competent service, and books, too! I'll be back. Beats waiting an hour for your coffee at the Paragon.

We also ate at the Astor, taking our food from the service counter to the upstairs bar where the music was playing. The electronic pager discs came in handy. The Astor had a makeover several years back. They seem to be aiming for upmarket pub grub, with some fancy presentations and interesting combinations. The menu reads well, but the execution is a bit patchy. I wouldn't choose to eat there purely on its merits, but it's not a problem if there's some act on that you want to see. Unlike the Bowling Club, which is very dire.

At the Astor, I had a chicken salad ($12.90) for lunch, which came with a mound of thin sweet potato crisps on top, and a generous sprinkle of sugar crusted kahlua pecans. A very nice combo in concept, and the chicken was nicely warm and moist, but the greens were a tad on the flabby side. The bloke had some bacon and cheese potato skins ($6.90) which he found over-greasy. They came in an edible bowl made of flat bread (I think) - a bit poncy and not so nice. We didn't eat the bowl and neither did a couple of other people around the room. Their pizzas ($13.50) were much more successful, I thought. The Astor kitchen has a wood fired oven, and the pizzas come out with a nice crust. The local cheddar mixed in the cheese topping gives them a bit of difference, the toppings are plentiful, and the tomato sauce has a strong oregano note that I enjoyed.

Suwannee is one of our faves as well, Goulburn actually being our sort of local ... we walked past the new Cafe Book and I do plan to try it, but we disdained it in favour of our fave bicycle-shop-and-greengrocer-cafe :). Apart from anything, I love the Melbourne-like combination of two completely different things. It's on Clifford St, which is a side-street near the cinema, and it even has a website: http://www.greengrocercycling.com.au/cafe.html.

It's a cafe-greengrocer with mostly organic and local stuff, does a solid slightly strong and bitter, but at least it's not dishwater) coffee, and we're very fond of its bacon-and-egg rolls in turkish bread, and its mushrooms on toast are good too. It's got pre-made sandwiches/rolls, lasagnes, and other meals, lots of good-looking salads, a fruit juice bar (orange apple pineapple mint for me thanks!) - and, according to the website, it also does pizza. (I've never noticed but then, we're generally there for brunch).

It's very open, lots of chairs, good outdoor seating (vital when one takes the dogs!), a close-offable-room (I suspect the local mothers' groups tend to go there a lot!) and nicely buzzy with seriously eclectic - the cyclists, of course, and the farmers doing their weekly town visit, and the families doing the library and shopping, and the teens starting their daily hanging-out, and the earth mothers and hippies ... it's my little slice of Fitzroy/Newtown (the best people-watching that side of Goulburn).

And because it's on a side-street, it's relatively quiet.

They've added a deli section now - basic cheeses and hams and olives and things - nothing sophisticated, but it does make it a useful one-stop shop for the sorts of things I tend to need in one place :) It also stocks Lynwood Cafe jams and preserves (can't go past their onion jam).

Another reasonable stand-by is the Rose Cafe opposite the park. You get more tourists, more un-child-enhanced couples, and it's a bit more crowded, but the food's solid and the coffee's pretty good.

We tried one of the local chinese after going to the movies (ooo! movies and lunch!!). Bog-standard - but very fresh and crisp - country town chinese. I do have a terrible weakness for sweet'n'sour pork and theirs was excellently crunchy and not at all soggy - not to mention huge! - so we'll go back :)

I had thought of checking out the Greengrocer, but there were some official breakfasts scheduled there and I though it might be too busy. It sounds good, though - next time, perhaps. We went to the Rose a couple of times last year, and I liked them. But it's a bit sad that they are closed on Sunday

i'm not surprised that the Cyclery was an official brekkie place - it's probably the only spot everyone could fit :)

I don't mind the Rose, but find it rather dark and enclosed (it's not, actually, but that's my after-image of it) in comparison to the Cyclery, which is more window than anything else. And yes, not being open all the time is annoying.

I don't mind the Paragon - the service hasn't been too bad the last few times we were there, and they do a lovely reliable country menu - steak'n'chips, excellent iced chocolates and milkshakes, etc. It's like the Central Cafe in Queanbeyan - the latter's thickshakes are something else! Have one, but ensure you order a smaller meal than you otherwise planned :)

There's a little cafe in the mall housing Woolies (not Centro - up the other end of town), directly opposite Woolies. It looks like a typical mall cafe and maybe it is, and my opinion of such things is unnecessarily jaundiced; but it's one of my surprising faves. Amazingly good coffee, huge brekkies (can you tell when we're normally in Goulburn??), crisp salady lunches; an unsurprising menu, but served with charm and flexibility. If you need to do some shopping and have something to eat beforehand, disdain Coles in favour of the smaller mall (it's got a Baker's Delight as well; I quite like their bread when I'm not making my own), have a cuppa in there and hit the Woolies.