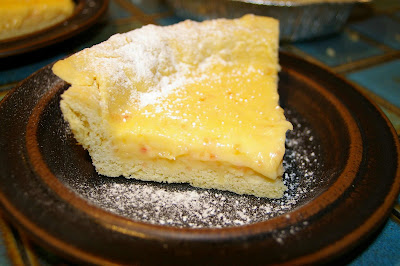 Saturday morning found me on the road to Bungendore again, off to another native foods cooking class at Le Tres Bon. This week's theme was native limes. Julianne and Anthony supplied a big box of finger limes for us to cook with, and we also saw some of the small desert limes and plants. The fruit ripens in late summer and autumn. But the limes freeze well, and we were using defrosted ones.

We made a vinaigrette, the tart, and an icecream base for gin and finger lime icecream. The vinaigrette was actually a perfect example of my non-recipe cooking. We each had a small jar, and selected from the range of vinegars and oils and herbs to make our own to taste. Mine came out very sharp (as I like it), and beautifully pink, with both the lime and native pepper contributing colour. Belinda's was more mellow, and brown, with a rich lemon aspen infused balsamic vinegar doing the colour. We ate them on a prawn and mesclun salad, and had some left over to take home. They were all good in their own ways. I'll put my recipe later on.

The tart and icecream are recipe material, and we got to eat ones that Julianne and Anthony had prepared earlier, and take ours home. With the tarts, the balance of filling to case wasn't quite right with the ones we made - as you can see, it's a bit shallow. But they are very, very delicious. Fi & I were simply forced to lick out our bowls and beaters, because you couldn't possibly waste any. The icecream wasn't as successful as the wattleseed variant - the little caviar pearls of the lime freeze solid, so you don't get the nice flavour burst. Tart recipe below the fold; I won't bother with the icecream.

For the rest of the weekend it's been non-recipe cooking. A big pot of chilli is simmering away for the week, and we've had chicken sorta-cacciatore, pizzas, and BLTs.

The BLTs were tonight - just simple sandwiches, so we'd have room for dessert. The bacon was from the Bungendore Food Lovers Deli, where the owner salt-cures his own ham and bacon from the local free range pigs. Good stuff. The pizzas were made at a friend's farewell party - he's moving to Melbourne. We assembled our pizzas on individual bases and shoving them in the oven, two at a time. With only about a dozen people this is fun; nobody has to wait terribly long. The pizzas only take 10 minutes and you can assemble, chat, drink, and generally hang about the kitchen. I put lots of anchovy on mine so nobody would steal it...

The other two no-recipe meals are the chilli and the chicken sorta-cacciatore. I don't bother with weights and measures and details - it will all work, even if it's never exactly reproducible.

For the chicken, I browned an onion and some garlic, tossed in strips of chicken breast and browned them too. Then I chopped up and added 5 fresh tomatoes, and a red and green capsicum, and some oregano and bay leaves from the garden. Add a dash of brandy, simmer for half an hour and serve with pasta and a green veg - asparagus and broccolini this time. I used fresh tomatoes because they needed using up. A tin would be fine. Mushrooms would be nice. Fresh basil would be good. White wine, maybe. It's a "whatever" dish.

Chilli is similar. I do follow recipes for particular variants, but as a generic no-recipe meal it works, too. I soaked and boiled some kidney beans - but a large tin, drained and rinsed, could do. I fried up onion, garlic, mushrooms, zucchini and minced beef - but kangaroo or even no meat at all is fine. And different veggies can go in - eggplant, perhaps, or corn. Add some tomato - a huge tin, or fresh ones, and some tomato paste, or tomato juice, or passata. Add herbs and spices - cumin and chilli are essential; maybe oregano, coriander seed, pepper, and even a dash of cocoa and cinnamon. Simmer it all together for a couple of hours; leave overnight to let flavours meld in. Add salt to taste at the end. It's very hard to go wrong. Though do remember you can't take chilli out, so add judiciously and taste as you go.

And now, as promised, the finger lime recipes. To prepare finger limes, slice them in half down the length. Use a teaspoon to scrape all the tiny "caviar" out. Remove any seeds once it's scraped out; it's easier than trying to get them out of the fruit. There will be a little juice, toss that into your mix, too. Discard the rinds. Actually, it seems quite tempting to try candying them, since the fruit is such a rarity at the moment. But we didn't. Maybe another time.

Notes: use a different oil:vinegar ratio if you prefer. I have a strong taste for acid, more than most people. And hey, look at that colour! That's basically from the pepper. The fruit colour is actually variable from very pale ice pink to a deep raspberry shade.

Put basin over saucepan of simmering water, and whisk continually until it is very pale and thickened - around ten minutes. It should almost double in volume. Stir through chopped butter, and when it is melted in, fold in the finger lime pulp. Set aside for ten minutes to cool slightly.

Fill a pre-baked pastry shell (about 20cm) with the mixture, and refrigerate for several hours. It will set more firmly.

Notes: we used a sweet shortcrust made with self-raising flour, but you could use any sweet or plain short pastry, even bought pastry.

The filling is a sabayon, and it's a little sensitive. Keep whisking pretty steadily; it's important for it not too heat up too much or the eggs will get grainy and scrambled. Take it off the heat for a minute or two if you're worried.

Hi there i was wondering if you would like to submit this recipe to www.theworldrecipebook.com we are currently looking for funky lime recipes.