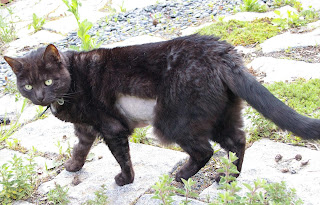 One does adapt to circumstances. After our initial scare that Shadow might have to be put down immediately, it was a great relief that he's responded well enough to his treatment to be able to come home. So now we merely have kittehs with a terminal disease, one very far advanced. They also have very silly haircuts. We're trying to get Plummet to accept the renal diet, which he's kind of almost OK with, except that he can smell the tuna and meat that Shadow is getting. Shadow won't eat anything else, and since he won't last long, he may as well enjoy his last few months. 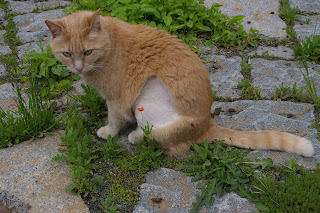 That renal diet is expensive! About ten times the cost of whiskas. The vet gave me a list of recipes to make your own, which I was quite keen on until I read them. I'm pretty sure they are American. Cans of clams aren't exactly standard fare around here. Oh well. As long as he's eating moderately well, that's the main thing. They're both bouncing around the house seemingly as healthy as horses. That's kidney disease for you - all well until sudden collapse.


In other news, I'm still feeling a bit down and slightly off my food. The job situation is getting to me, even though I know that the Public Service processes are very slow. Not very much music is happening either; my singing teacher is down with a very nasty shoulder injury. Too much facebook game time is going on. Hey, wanna be my friend, and play cafe world and fellowship and that zoo game thing and farmville and treasure mania and bejeweled blitz? Hmmmm. Could be slightly excessive there...

Well, I'd better look more on the bright side. I'm still reviewing for the Canberra Times, so I get to go out for fancy dinners even while unemployed, yay! And it's springtime and the garden is doing well. I planted Kipfler potatoes and they are up and flourishing. There's spinach and rhubarb coming along and my hydroponic lettuces are growing quickly. Perhaps too quickly, they're stealing the water from the other plants in the box. The baby apricot tree is setting fruit, the fig tree and the new cherry tree are sprouting leaves. And we've had a lovely display of irises, too. 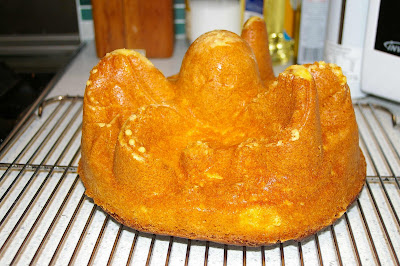 I have cooked a few things, mostly simple repeats like the pulled pork, brown bean sauce noodles, spag bog, and grilled meats and sausages. I have a half finished post on a curry dinner that I made before all this fuss. I should finish that one off, I suppose. I've also made an egg and leek and potato dish that won't be reappearing on the menu because it needs too many saucepans. I've also made the annual Xmas cake, and I used my gorgeous new birthday cake pan to make the orange cake that came on its label. This is it - photo is not ideal, and some icing would enhance it, but I think it's clear enough to work out what it is. Cool, eh?

I've also been out for a few meals. We've done pre-theatre quick dinners at several places. The Wig & Pen - great beer, tolerable pub grub - is an old standard and close to the Street Theatre. Tosolini's is pretty good food, convenient to the Canberra Theatre. Entree sized pastas are enough if you have bread and salad, too, and it's pretty quick. And we also tried out Coo, which had terrible, terrible service. We only ordered sushi, and though you'd think that would be quick, only two of our 4 items actually made it to our table in 45 minutes, and then we had to leave. It is very new, though, so I'll be giving them another chance some time. And the food we did have was delicious, and they apologised a lot.