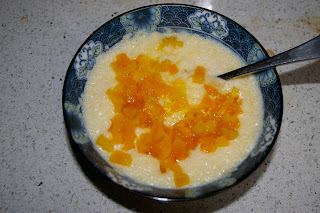 With winter passing into memory for another year, we've still had enough of a Canberra spring - warm and sunny one day, freezing the next - to feature porridge. This is another find from my recent Jamie Oliver book, "Jamie Does..." a couscous porridge with apricots. There are two good concepts here, one is the honey-sweetened couscous as a porridge, and the other is the fresh, uncooked dried apricot dish.

Prepare the apricot compote in advance.
When ready for breakfast, make the couscous.
Notes: Of course it's varied from the original - I so rarely follow recipes these days. Jamie Oliver serves this with pistachios that have been toasted on the spot, and drizzled with honey. I'm not fiddling with that at breakfast time. And he purees the apricots in a blender, while I prefer a more chunky style.
Posted by Cath at 17:42 3 comments:

Hail to the Spring! I got to the growers' market for the first time this season, and it's obviously spring. Fresh new asparagus, garlic, cheap new snow peas and sugar snaps, early heirloom tomatoes, broad beans, mulberries and blueberries - and the first of the stone fruits are in. I didn't queue for a tray of nectarines, but I did buy cherries and blueberries.

Today's breakfast: watermelon, rose petal and green almond jam (from Silo), on buttered sourdough, with a side of fresh cherries and a small fresh squeezed OJ. *bliss*

Farewell to winter. The last of the oranges were there in profusion, and a stall selling fresh squeezed juice. A young chap up the back of the stall was pouring it from the juicer into bottles for easy takeaway. Borenore still has lovely apples from the cold store; it will still be two months for the new season.

And while I haven't been blogging I've noticed a few good things pass. So I'll tip the hat in sorrowful farewell to them now. My favourite pho place, Huong Viet, is now long gone and replaced with a pizza place. The wonderful TurkOz of Dickson has gone, to my great sorrow - they did the best pide in town, possibly excepting Mawson which is a bit far for me to go regularly. And in Manuka, Ironbark has folded, so there's no more of their wonderful native Australian foods - if you want a boab shoot salad or a bunya nut felafel, you'll have to seek out the ingredients and make it yourself. I'm also sad about the departure of El Torogoz, with its authentic central American cuisine. Goodbye and good luck!
Posted by Cath at 10:16 5 comments:

A very belated Happy Birthday to me! 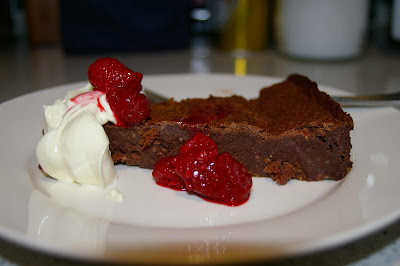 Happy Birthday to me! I'm a hundred and three! I look like a monkey, I'm sure you'll agree.

OK, not really, but it was a contender for Worst. Birthday. Ever. I spent it on the couch snorting and snuffling with a nasty sinus infection, looking at all my facebook messages (which was nice) and failing to get a doctor's appointment. Luckily CALMS had appointments, so I got antibiotics on the Saturday and felt improved enough to bake, if not 100%. Even so, I had to get 2 more rounds of antibiotics after that one.

But damn, why was I writing that tripe? Pathetic whinging has its place but surely the entire point of a birthday post is CAKE!!! So let us discuss CAKE.

The custom at work is to take in a cake for one's birthday. Tuesday was the next working day, so I baked on the public holiday Monday. I intended to make a chocolate chestnut cake, but I couldn't find the recipe in my half-hearted search, so instead I made a chocolate raspberry cake from Chocolate and Zucchini - not the blog, but the book. This is one of those cakes that's more like a fudgy mousse. Almost solid chocolate.

It's pretty easy to make, and quite impressive.

The variations I used were minor - salted butter rather than unsalted butter plus salt; 10g extra flour; self raising rather than plain. I added the little more flour because the mix was so sloppy I thought it would help. Using self-raising was an accident from vagueness, but it seems to have worked fine.
Posted by Cath at 22:15 No comments: 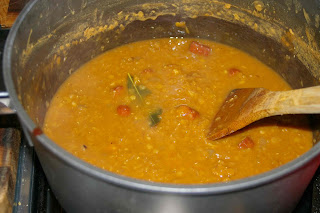 Wow, has it really been over 3 months since I last posted? I wasn't intending to quit, but it's been hard to find the inspiration. I was rather annoyingly sick over a lot of winter, and also away on holiday for nearly a month and then immediately sick again when I got back. I did write a birthday cake post back in October, but it was so full of whining that I never got round to editing it to a fit state for publication. But now the weather is warming up and I'm feeling some inspiration at last!

Tonight I'm feeling VERY smug indeed. I got home from work about 6.30pm, and while The Bloke was off helping B1 with a dodgy internet connection, I managed to whip up a lentil and chorizo soup and a "spinach and cheese" damper made with silverbeet from the garden - and have dinner basically ready for 8pm when they came back. And to top it all off, we can have homemade gingerbread for dessert. A three part meal with all parts cooked from scratch! Not bad for a school night, if I do say so myself!

The soup was a recipe from AB, with some slight variation. The damper was a generic damper tweaked around. I'd picked the silverbeet on the weekend, as it was running to seed, and cleaned and steamed it and chucked it in the fridge, thinking of perhaps a mid-week frittata. The gingerbread I made on the weekend, to take in for a work morning tea. It's a recipe from an old favourite book, Elisabeth Ayrton's Cookery of England. A gorgeous fat Penguin paperback from 1977 full of regional and historical recipes; it was the first cookbook I ever had with history. And it has a recipe for home made crumpets which now that I think of it, I must do again sometime.

But first, here is tonight's menu:


Note: You could fry chorizo slices with the onion if you don't have it pre-cooked on hand. Balsamic vinegar varies a lot in strength so it's best not to overdo it. Also, AB's recipe has 2 finely chopped celery sticks and specifies 800ml homemade stock. I used a tetrapack of Campbells, sorry AB!


Notes: Drain the spinach really well after cooking. Squish it down hard to get as much water out as possible. Also, this would be good with fetta and some spring onions, but I didn't have any.

Notes: This is quite a dry
gingerbread, and goes very well sliced thin, and buttered. I used a mix of 100g golden syrup and 50g treacle. I varied it by adding 30g of finely chopped glace ginger to the mix, which I definitely recommend.
Posted by Cath at 19:34 3 comments: