O hai, I can has weekend?

I haven't had many at-home weekends recently. I've been madly gadding about like a mad gadding thing. I've been to the Goulburn Blues Festival; Corinbank; a friend's birthday (staying away the night); visiting a friend in Sydney; and last weekend I was off to the global atheist convention in Melbourne. It's been fun, but exhausting - this sort of schedule doesn't mix well with full-time work. But yes! I have finally had a weekend at home! And I even have another whole free weekend before we have our Easter houseguests.

For a while I was feeling a bit guilty about not blogging, but I got over it. It's supposed to be some fun for me, not an obligation. I do keep thinking about it, so I don't think I'm over the whole blogging thing yet. Plummet decided to wake me up at 4.30 this morning, so I'm feeling a bit ordinary. But nevertheless I've had a good go in the kitchen, and am feeling quite proud of my production, and feel like telling the world.

Hello, world! Today I made roast tomatoes, stewed rhubarb with mixed berries, Thai red curry pork with veggies, and a spinach and cheese potato bake. The spinach and spring onions in the potato bake, as well as the rhubarb were from the garden, so that's extra gratifying. And yesterday I took a cake baked in the octopus shaped tin along to Skeptics in the Pub, where PZ Myers was speaking.

The curry was just from a paste, Mae Ploy brand. I used some lean pork, and added eggplant, green beans, red capiscum and bamboo shoots. And I used light coconut milk, not the proper rich coconut cream kind, so it's a bit thin. It's OK for an easy dinner, though it's a bit hotter than I intended! My previous tub of Thai red curry paste was Maesri brand, which I now know is milder. 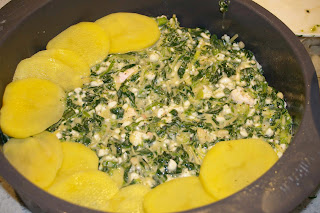 The spinach bake is a trifecta of virtue: home grown veggies, using up some things that were on their last legs, and preparing for the work week in advance. Can you actually see my halo? *ting*

There's no recipe per se, but this is what I did.

* I mixed together a tub of low fat cottage cheese, some leftover fetta marinaded in olive oil & sumac, and 7 eggs. All of these were very close to their use-by dates.
* I ground in some pepper and chucked in some extra sumac, pine nuts, a handful of grated parmesan, a couple of crushed cloves of garlic, and three chopped spring onions from the garden.
* I picked lots of spinach from the garden, washed it and chopped it roughly. Microwaved it to wilt it, then wrung it out and chopped it up.
* I decided there wasn't enough spinach for me, so I defrosted about 250g of frozen spinach and added it in.
* Oiled a cake tin that seemed about the right size. (It's silicon, but I'm getting less trusting about the non-stick qualities of that where eggs are concerned.)
* Washed, peeled and finely sliced up four large potatoes (Dutch cream, they really are quite yellow).
* Layered it the cake pan - potato, spinach, potato, spinach, potato, spinach, potato.
* Took a picture part way through the layering.
* Baked it at 150C for half an hour, then added a bit more parmesan on top and baked it for a further twenty minutes.

And that's it - I made it up as I went along. I don't know yet exactly what it tastes like, since I haven't cut it open, but I'm sure it will be fine. It's hard to go wrong with spinach and cheese. And it will come in very handy this week. It can be reheated in wedges in the microwave, as cafes often do with their frittatas, or in a slow oven.