It's always exciting to try something new. I'd heard of spaghetti squash before, but never actually seen one in real life until just now. I found one in Choku Bai Jo, and I'm told that they grow quite well in the Canberra region. Since it's such an oddity, I've taken lots of photos.

So here it is in its original state, looking a bit like an elongated honeydew melon. There's a nice big avocado next to it for scale. The first step is to cut it in half, where it now looks like a cross between a melon and a pumpkin.

Now you need to cook it, and this is where the advice I found differs. Either you can put it in a greased oven tray, or on one with a couple of centimetres of water in it. Place it cut side down, and bake at 180C for about 30 minutes, until it's quite easy to pierce the rind with a knife. Take it out and scrape out the seeds. You can leave it to cool first, but I found holding it with an oven mitt and scraping with a spoon was fine.

And now, take to it with a fork and scrape lengthwise along the squash, and you will end up with a lot of strands, like angelhair pasta - that's very thin spaghetti. Serve it how you will. 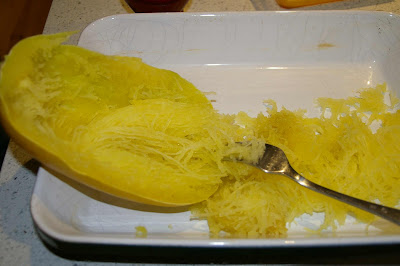 Don't expect it to taste like spaghetti, no matter what the low-carb diet books say! It's definitely a squash, more like zucchini. But the texture is fun, and it makes for a nice light meal. Good for summer, tossed with pesto, olives and fetta, perhaps. We actually ate it with a tomato, olive, bacon and chilli sauce. It seemed to need cheese quite a lot. I've also had some tossed with tuna, chilli, peas and corn. It seems to leave me a bit unsatisfied, like having a salad for dinner. A hunk of nice bread would help complete it. Or it could be a side dish - I think it would be good in a gratin.
Posted by Cath at 22:39

Oh wow, I've been looking everywhere for these! CBJ is where I will go :-) I'm going to grow my own next year - I've got a really old one (last season's) from a friend. I'll also pester Organic Energy and see if they can get them in.

Spaghetti squash is delicious and a great alternative to traditional pasta. Very nice post and great photography. Thank you for sharing.

About 25 years ago or so, I bought one of these for the first time. I knew what they were like because my mother had served them a few times, but now I was off on my own. So I get to the checkout counter and the clerk says "Oh, I've always wanted to try one of these, how do you cook it?" And, my response was to, stop think real hard and say "I have no idea. I guess the first step is to call your mother and say 'Mom, how do you cook a spaghetti squash?'".

Definitely a side dish, not the main meal.

Oh, how funny, here I am growing spaghetti vegetable because I had not been able to buy them in Canberra, and they have them at Choku Bai Jo, which I've only recently finally gotten myself to, at their new shop in Curtin!

They do grow well in Canberra, though, as we grew 11 big ones this year!! Only got a few last year, but this year, heaps... going to try storing them through Winter, and of course, have been eating them as a side dish. Cut (the skin can be hard) into large pieces, remove seedy section, then boiled til just falling off the skin, and fork off, serve with cracked pepper and margarine/ butter!

Thanks for everyone's input here, but what is the best way to grow these in Canberra soils. I have fairly poor thin topsoil that I struggle to grow food plants in and have been using a smallish raised garden bed for my main crop. When is the best time to plant from seeds and transplant into the garden beds?