Christmas and the Crazy Cake 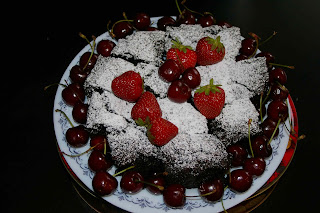 You might want to know that there is a pre-Christmas market at EPIC on Thursday 23rd, and then a break until 15 Jan. And despite the rains, there's still plenty of cherries to be had.

And the day is nearly here. This year it's a really weird one for me. Hardly any cooking - no relatives visiting; and we're going to a friend's place for lunch, then going to Sydney to spend some time with B1 & M. I have made a cake, and in a vague effort to get in the spirit, I made a turkey risotto tonight. Though with pre-cooked turkey breast from Woollies, and packaged stock it is nowhere near as awesome as a proper leftover feast.

There have been work Xmas parties - three, count them: my unit, our group and the whole institute. And there were musical events - my teacher's studio concert, and the St Phil carols. I've contributed cookies and fruit plates and cakes and pies, and eaten mince pies and old-fashioned white Christmas, and some amazing coconut sticky rice (Maneerat has promised to give me her recipe for that.) The tree is up and the kittens, now small cats, have pulled off the first decorations to roll round the room.

The piccie here is of a "Crazy Cake", cut up and decked with fruit ready for the supper at St Phils. It's a strange recipe, that I couldn't resist trying out. I don't even remember how I found it, but the recipe comes from a vegetarian site. Maybe one of my facebook friends mentioned it, or something. It has no egg and no dairy, and was apparently a depression era invention.


Preheat oven to 180C (170 fan-forced)
Sift together flour, sugar, cocoa, salt and bicarbonate of soda.
Mix the water, oil, vinegar, vanilla and coffee together.
Pour wet ingredients into dry ingredients and mix well.
Pour into a baking-paper lined 22cm square cake tin.
Bake for 30-40 minutes, until a test skewer comes out clean.
When cool, dust with icing sugar to serve.


Notes: Seriously, amazing. It works. The vinegar is important to react with the carb soda for leavening, it does not end up tasting vinegary. It's an American recipe, so the tablespoons are 15ml. (And the flakes weren't in there originally. I guess they were about 3/4 cup.)

If you look at the original recipe you'll see I have changed a bit, using coffee instead of water, a different type of vegetable oil and vinegar, a lot more cocoa, chocolate flakes, and a smidge less sugar and salt. And I lined the tin - and would recommend that strongly.

But I've got nothing on the commenter who said "1)I used whole wheat flour, 2)I used applesauce instead of oil, 3)I used a cup of sugar-free raspberry preserves instead of sugar, 4) I used rice milk rather than water, 5) I added 1 cup of Sunspire Grain Sweetened Chocolate Chips to the batter, 6)Rather than greasing the pan, I lined my cake pan with Reynolds Release Non-Stick Foil, which worked perfectly" I mean, is that even remotely the same cake?

If you do read the comments, you'll notice lots of other variations, and a couple of things that worried me - some said it was dry and tasteless. Well, lots of extra cocoa would have sorted the tasteless. I suspect it might go dry if you leave it in the oven too long? Anyway, mine came out moist and very fluffy. I may have overdone the bicarb. It actually seemed better the next day, when it had settled and solidified just slightly.
Posted by Cath at 22:20

thanks cath, yummy looking cake and a great heads-up on the market this thursday - according to their website it will be a twilight Market from 4pm to 7pm. Really pleased as i didnt know this until i saw your blog so now i can get lots of yummy food in for xmas, horay!!

It looks beautiful, I mean delicious.

I guess a lot of people use a recipe as an inspirational take-off point. :)

Oh, I do too, Monado. But I do like to retain *some* connection to the original :)